The last time, I analyzed the the hardware and figured out where the firmware is stored. So let's dump it. The datasheet tells us, that the flash IC has an SPI interface. Now we need something that adapts SPI to a more common interface like preferably USB. There are several devices to to this:

So I purchased the FT2232H Mini Module and built an adapter to connect the SPI flash to it. 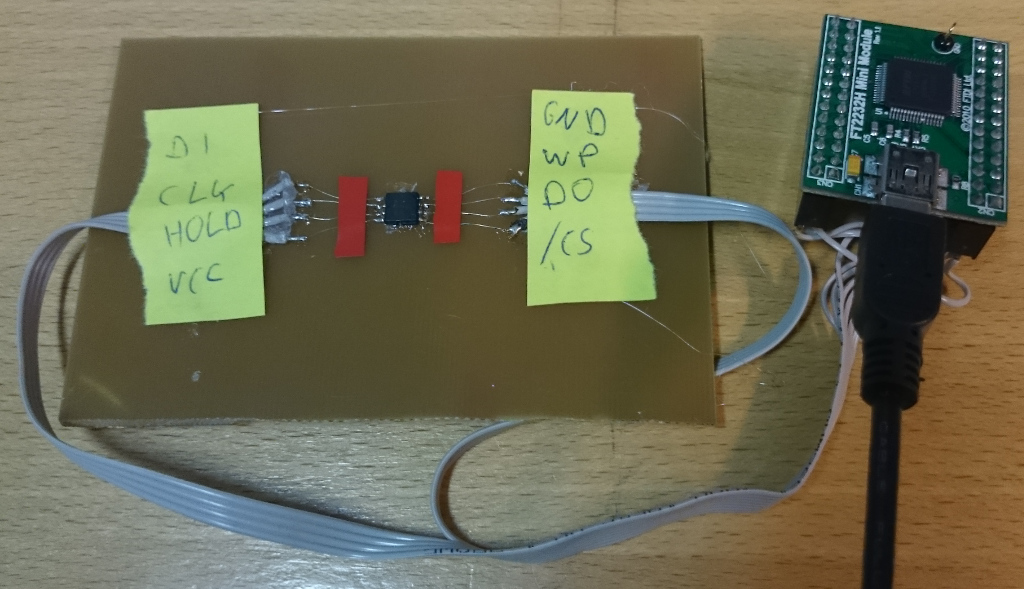 The FT2232H contains a so called MPSSE (Multi-Protocol Synchronous Serial Engine) to do SPI. Side note: FTDI claims that the MPSSE also supports I²C, but since the FT2232H doesn't have open-drain outputs and has some glitching issues, it's really painful to implement. Since my existing code was developed on Windows™, it used the proprietary FTD2XX driver. After some fiddling, I got ftd2xx to work on python 3. Sorry, libftdi people :(

Implementing the protocol used by the SPI flash was rather straightforward since its datasheet is available. One particular nice aspect of the protocol is that you can read an arbitrary amount of data after sending the start address. So I hacked an IPython notebook to dump the flash. Magically, it worked the first time, therefore I didn't bother to clean it up to make it publishable.

In the next post, we'll dig into the romdump.